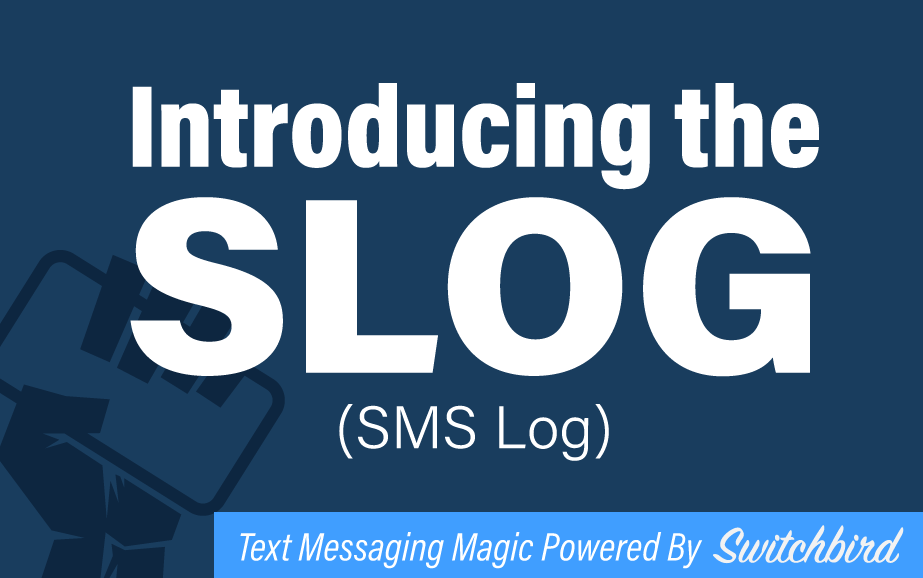 There’s a new content distribution trend with the potential to succeed blogging, vlogging and social media as the most powerful digital medium for building an audience or community around shared content.

For those businesses and content creators who embrace it, this mode of sharing is incredibly powerful. It could well be a wiser investment than your social media, blog or email newsletter.

I’m talking, of course, about slogging.

Slog Your Way Out of Platform Risk

Before I cover exactly what slogging is all about, raise your hand if you’ve ever put effort into building an audience on social media, and then:

Businesses and content creators have flocked to social media platforms over the last decade or more looking to build new relationships through content and outreach. There’s a huge industry of tools, agencies, influencers and training programs to teach us how to do just that.

But when we’re building on social media, we’re building our castles on rented land. And there is real “platform risk” when the very substrate in which your audience or community or network exists is owned by someone else.

Slogging is a way to build that same audience or community or network using many of the same tactics and skills, but without ever being beholden to a third-party to reach them.

In the venerable digital tradition of sharing bite-size content serially over time as a “log”–via the Web as a Weblog or blog, via video as a videolog or vlog–I’m excited to introduce the SMS log, or “slog.”

The term is a natural-enough fit for the activity. Many of us already refer to what we do this way!

But slogging via SMS has unique properties owing to both the advantages and constraints of text messaging as a medium: 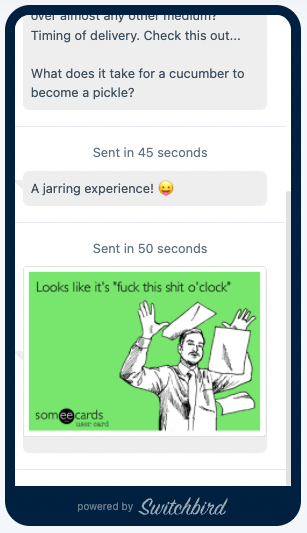 Since text delivery is near-instantaneous, a slogger can precisely time when their messages reach their audience. Slog content can be broken up into cadences of several messages that unfold over time. Here’s an example I scheduled for 5PM on a Friday (in each contact’s own time zone) with a joke, punchline, and celebratory follow-up.

Because of the structural and technical differences in SMS vs. Web platforms for blogging, vlogging and social media, slogging is different. Slog content can take advantage of the Web (thanks to the ubiquity of smartphones) but also opens up avenues for content innovation:

These are just some initial observations I had about the world of possibility that slogging opens up.

As the founder of a business text messaging platform, I invented the slog as a way to “eat my own dog food” and push our product in new directions.

Also, ever since I started investing more of my time sharing content on LinkedIn this year, I have felt increasingly unnerved by “platform risk”–by building my castle on rented land.

Slogging gave me a perfect way to mitigate some of that platform risk while also testing the waters of a new mode of content creation. I simply started inviting my LinkedIn audience to text me directly on my Switchbird number to receive occasional follow-ups, videos and additional shares on the topics I post about.

I’ve built a nice list of slog “followers” already in my first few weeks of the project. The term “follower,” though, it too reminisicent of the insidious social media platforms we aim to disrupt. So let’s call them “subscribers” or “participants” or just “contacts.”

The overall experience of creating and sharing content directly to my slog subscribers–and receiving direct responses–is extremely gratifying. It’s like connecting with large numbers of diverse people who share your affinities and interests at a networking event or on social media. But the venue here lacks the noise and hegemony of those venues. On LinkedIn you might be challenged for sharing something personal: “This is not Facebook!” But the rules of your slog are your own.

I have, of course, encountered naysayers and points of friction with slogging.

One LinkedIn connection responded to the whole idea of the project, saying: “This is the equivalent of asking people to use typewriters instead of computers.”

Don’t worry, I demonstrated that his analogy falls apart pretty. Social media is not so technically superior to text messaging. Both “platforms” live on and can leverage the powerful computer in your pocket. Consider the differences and advantages of SMS above. A more useful comparison exposes the power dynamic in choosing one over the other: “Slogging is asserting ownership over our content/audience/community/network rather than building those for the benefit of our Big Tech overlords.”

Another point of friction came with one of my slog subscribers. He was using a US number but, as it turns out, was based in Portugal! So my slog messages were inadvertently buzzing his phone in the middle of the night. An easy fix provided you know the actual time zone of your subscribers–and use it! This is something we’ve added as a feature to Switchbird, and something I’ve added to my repertoire as a slogger.

But he also mentioned the distraction of receiving “content” via SMS, a medium he uses for more urgent, actionable messaging from friends and family. That is an interesting challenge. I polled my subscribers about when (what time of day) they’d like to receive slog updates, and although most responded “anytime,” the rest showed a clear preference for evenings. That makes sense: save the fun stuff for then when work of the day is out of the way 😉 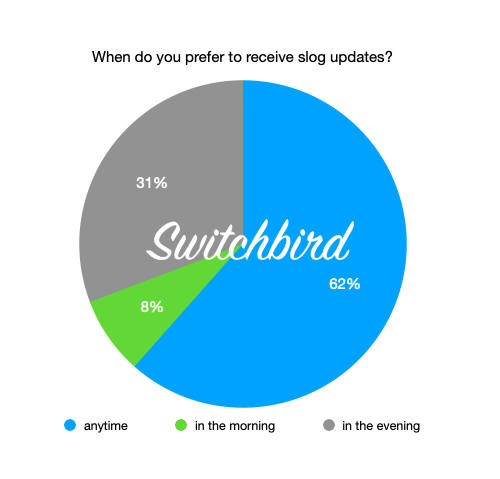 While 63% of my slog subscribers said they were happy to receive slog updates “anytime,” the rest showed a preference for evenings.

We have a lot to learn yet about if and how the SMS log or slog can eclipse other forms of content distribution and community-building, whether by creators or businesses. But it’s an interesting proposition.

Let’s face it, when building your network or audience on a third-party platform, your “platform risk” is high. Even if you don’t believe that Google, Facebook, LinkedIn, TikTok, etc. are going anywhere, they can–and some do–throttle your reach to get you paying for it.

SMS on the other hand has been around 30 years, and no one entity owns it. If you build your network or audience there, the connections are direct. You own them.

I've been immersed in tech and local business for two decades. When the Covid pandemic hit, it became all too apparent how local businesses still need better tools to adapt to and thrive in an uncertain future. I founded Switchbird to provide one of those better tools.